Project Narrative: What are people saying about your initiative?

Most executives are getting less than an hour of uninterrupted work in a typical day. The result is what we call ‘performance interrupted’. It is a particular challenge for those working on multiple teams and projects.

Juggling multiple tasks is part of our modern ways of working. Yet, unmanaged interruptions could be costing you more than 21 days per year. Moreover, when it comes to your most complex work, it could even be dumbing you down by between 5 and 15 IQ points!

If your goal is to sustain peak performance (in the face of growing pressure) then managing unplanned and unwarranted interruptions is likely the greatest opportunity available to you.

The Growing Volume of Interactions

Normally we describe a team in terms of who is on it, who leads it and where it sits on the organizational chart. We might also talk about the number of people, its key responsibilities and focus or expertise. But there is another way to think of a team – it is to see it as a bundle of interactions. For example, one team equals approx. 1000 interactions per month. These interactions are the hearth beat of the team. With this in mind let’s take the pulse.

Imagine a project team had 12 members and 20 stakeholders. If all of these were to interact with each other just twice a month then that would amount to almost 1,000 interactions (i.e. emails, calls, IMs and so on)1.

Each interaction is two or more people so the number here needs to be multiplied by 2 or 3 to get a picture of the busyness of a team. Then to show how these interactions fill people’s calendars requires multiplying that number by an average length of interaction – something that is expanded on later.2 In any respect, you get the idea – there are a lot of interactions going on within teams.

All this analysis is leading up to the real question: How many of these are effective interactions or simply unwarranted interruptions? The answer has surprising implications for the performance and potential of a project team.

Regardless of the actual number of interactions imagine the impact of improving their effectiveness by just 3, 5 or 10%.

Is Your Performance Being Interrupted?

Performance Interrupted describes what happens when you don’t get to focus on any one task for long without being interrupted. These interruptions are relentless and take the form of calls, emails, IMs, social media and so on.

To understand the extent to which your performance is being interrupted, reflect on the following questions:

Let’s run some numbers in answer to the above questions, starting with the first 3 questions to calculate the time lost. Then, we will look to the other implications that are harder to measure, but perhaps even more significant.

Interruptions – What is the Cost?

Here is a scenario that is close to the norm for many senior executives:

This scenario is based on an interruption every 60 mins lasting 15 minutes, with 35% of such interruptions being wasted or unwarranted (so it could be seen as a conservative estimate in some ways4).

This rough analysis is aimed at getting you thinking5. So, imagine what you could do with another 21 days in the year! For many executives that is more than the amount of annual leave taken in a typical year. However, even if the figure was just half of that shown here, it would still be worth tackling.

What are the broader implications?

It is not just about the lost time, however. When we talk about performance interrupted the effects run much deeper. Firstly, there is the impact on the work you were doing before you were interrupted.

There are the implications of a stop-start approach to your work, including the lost momentum, the time it takes to get back up to speed, the errors and any re-work required.

If the work you are doing is complex and non-routine, unmanaged interruptions are likely to impact on its quality and efficiency.

Next, let’s consider other implications of being constantly interrupted:

Are Interruptions ‘Dumbing You Down’?

We use the words ‘always on’ to describe our lives and our work.  But a more accurate description might be a state of ‘Continuous Partial Attention’.  That is what Linda Stone calls the pattern of ongoing interruption and switching6.

It is called partial attention because runaway multi-tasking could mean a loss of up to 15 IQ points (5 IQ points for women and 15 for men)7. While these numbers are intriguing (if based on limited research) the point is: Interruptions to complex work requiring focused attention can result in blind spots and errors.

Our limited understanding of the impact of constant interruptions is a blindspot. It takes a stark headline like the above to challenge our believe that multi-tasking is efficient, even effortless.

The central message is that when the work is complex and you are under pressure, unmanaged interruptions can represent a significant performance loss. It can and will hinder sustained peak performance.

So there are two quantifiable motivators for managing interruptions to your work. The first is time – the possibility of saving up to 21 days a year! The second is up to 15 IQ points! That is without even considering the impact on your motivation and vitality (or wellbeing).

However, regardless of your own motivation, the message is clear: Managing interruptions is essential. This starts by identifying the key sources of interruption – that is the so-called Time Bandits and Energy Vampires8.

So, pause for a moment to consider: Who or What are the key sources of interruption? Who or What most drains your energy or motivation? Remember, you may need to look in the mirror when it comes to the source of some interruptions!

Next, plan how you will manage interruptions based on the following questions:

If your goal is to sustain peak performance (in the face of growing pressure) then managing unplanned and unwarranted interruptions is likely the greatest opportunity available to you. 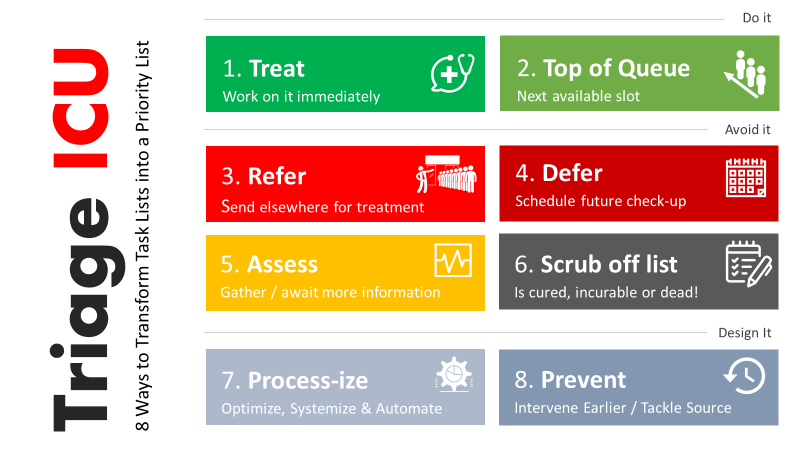 8 Ways to Triage Your Work

Managing Interactions – What’s the Payback for You?