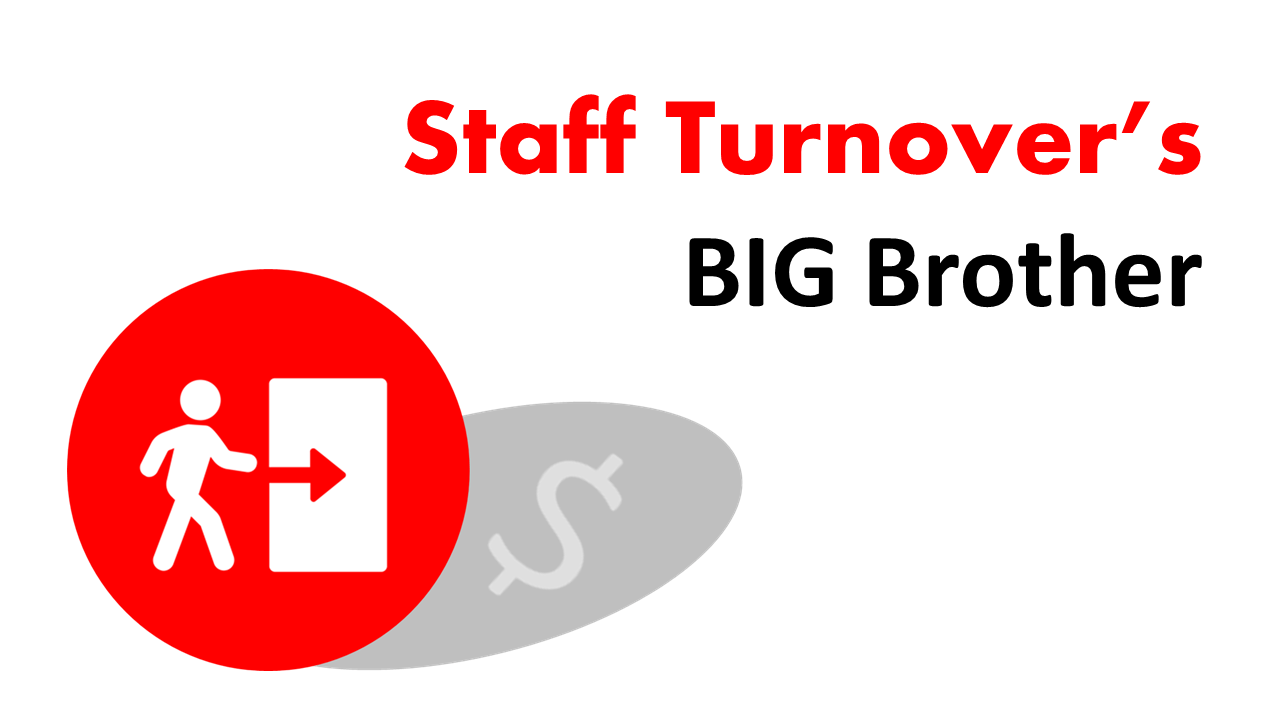 Worried about Staff Turnover? Well, there is another even bigger drain on talent that needs your attention too.

In these full-employment times, managers are rightly focused on reducing staff turnover.  But most don’t realize that Staff Turnover has a BIG brother, another talent-related challenge that could be up to 2.5 greater. It is the volume of unproductive time resulting from internal collaboration overload and in particular too many ineffective or unnecessary internal meetings.

Staff turnover is a problem – a very costly one. But, while retention steals the headlines, there is a larger and more insidious talent-related problem that gets almost entirely overlooked.  It is a problem that could be as much as 2.5 times greater!

The Hidden Problem Is…

The hidden problem isn’t about people leaving unnecessarily, but rather people meeting unnecessarily.  In particular, the amount of time spent on internal meetings that add little or no value.  Pitstop Analytics™ data puts this figure at an average of 37% of the typical working week.

It is worth pausing on that figure for a moment.  More than a third (37%) of the entire productive time available to an organization’s workforce (including its senior management) is being spent, or miss-spent on internal meetings (and other forms of internal collaboration) that add little or no value.  That is a staggering figure!

Putting it in Context

To put the figure in context, an organization that is losing around 15% of its talent to staff turnover(1), could be losing up to 37% due to unproductive internal meetings!

15% from 37% is 22%, in other words meeting overload is costing 22% more total talent (time, skill, energy, etc.) than people leaving! Indeed, in direct terms it could be costing up to 2.5 times more (2). In any respect it is about a lot of lost hours, days, weeks and months.

When you add it up and apply across an entire organization the numbers can be staggering. For an organization of 1000 people, up to 370 of them are likely to be in an unproductive internal meeting at any point in time. That is 370 people could be doing work that matters – like cutting through their to-do list or more to the point working on important and interesting projects. Alternatively, they might be as well to leave the office and go shopping or golfing!

It isn’t easy to calculate the lost output or lost productivity as a result of spending so much time on non-value adding collaborative activity. Much less to put a cost on it. But easy to quantify is the wages paid to people while they are sitting through waste of time internal meetings or sifting through lots of unwelcome cc’d internal emails.

Time is money and if people are spending up to 37% of their time on unnecessary or ineffective internal meetings and other forms of non-value adding collaboration then the cost can be directly mapped onto the wages bill.  So, 37% time wasted is 37% of salaries wasted.

Of course the wage cost of so much unproductive time is only one measure of is broader impact on an organization. People are not just a cost driver, but the creators of value. The value lost is harder to measure, but no less important.

Economists tell us that wages account for approx. 50% of overall economy(3). The rest is the return to capital or value added element of output. So a simple calculation of the total cost of the time wasted would be to double the wages bill. That is only a start however, for many organizations the correct multiplier might actually be 4, 6 or 10(4).

The New Brain Drain Is…

Traditionally, staff turnover was talked about in terms of a ‘Brain Drain’. However, there is a new even greater source of ‘Brain Drain’. That is people spending most of their time going from one internal meeting to another. It is not just about lost hours but also about lost ideas, lost energy and lost engagement.

There is of course a double meaning to the use of the term ‘brain drain’. After all, most executives are likely to feel drained on leaving a meeting that has been a waste of their time! This collective draining of organizational energy to be a factor in quantifying the cost of poor internal collaboration – as is the case with Pitstop Analytics™ .

Of course it would be too simplistic to say that: ‘Internal meeting overload is two and a half times the problem that staff turnover is’.  But, it certainly does deserve more management attention.  The potential payback is to give each person back 2, 4, 6 or even more hours per week so that they can be more productive.

The important question is: How much time could you save if you cut down on the number of ineffective internal meetings and emails?

The impact of cutting turnover by 2% in a business unit of 1000 people could be the equivalent of cutting the number of internal meetings each week by 24 (5). Indeed, every 1% improvement in internal collaboration could have the same impact as reducing staff turnover by 2% (6).

The first step is measurement –  but while many managers track staff turnover, they don’t have KPIs to minimize the lost time, talent, energy etc. due to poor internal collaboration and internal meeting overload. This is where the Return on Collaboration™ metric comes in. It is a next-generation KPI that tracks cross-functional collaboration as a key driver of organizational Competitiveness, Agility & Innovation:

Talking about internal collaboration in terms of dollars or euros is key to getting senior management attention. Yet, Return on Collaboration™ isn’t just about cutting the cost of unproductive internal meetings and other miss-collaboration. Certainly, that is a great opportunity, but the issue of effective collaboration goes much deeper. It goes to the heart of competitiveness, agility and innovation in an increasingly VUCA world, also to how the future of work is changing.

Effective internal collaboration is inimical to the changing shape of the modern organization. That is the shift away from the traditional and rigid organizational design with its vertical hierarchy and functional silos.

The demands for increased internal collaboration stem from the realities of a flatter and more matrix-like organizational structure – a network of teams that span traditional boundaries and functions. Managing Return on Collaboration™ is key to the successful transition from vertical to horizontal and from rigid to agile, depends on the ability to master internal collaboration.

(1) 15% as a rate of staff turnover could be seen as a mid-range figure, with data from different sources putting industry-wide level of staff turnover at anywhere between 10% (linked-in data) to 25% (Deloitte), with other sources citing rates of 18% (SHRM) and 23% (Mercier).

(2) This is an important point as the indirect costs of staff turnover are a key consideration. They include lost productivity, as well as the logistical costs from recruitment costs to time spent interviewing candidates, training new hires, etc.

(4) This of course is likely to be a low estimate. There are many sectors of the modern economy where simply achieving twice the wages cost in revenue would derive sufficient profitability. An alternative would be to apply the firm’s net margin to the wages cost of unproductive internal meeting time thereby calculating the revenue that would need to be generated to cover the cost.

(5) Calculation is based on a business unit of 1000 people, where a 2% reduction in staff turnover is the equivalent of 20 people. In terms of productive time this can be estimated as the equivalent of 24 internal meetings per week (avg. 6 attendees duration 66 mins).

An Issue that Is Going Nowhere!:
Ways of Working – Why it will dominate again in 2023

Disciplined Prioritization:
Ready to Ditch Half of Your Priorities?