The Business of Winning

Simplicity at the Other Side of Growth Complexity

A Powerful New Way to Look At Performance & Growth

Achieving breakthroughs requires new insights, new realizations and new perspectives. This routinely happens within Growth PitStop™ workshops thanks to the use of a powerful technique called ‘cognitive re-framing‘.

The power of the PitStop process is rooted in the fact that it gets managers and their teams to think about business growth and team/personal performance in a new way.  The result is what we call ‘Ah-ha!’moments. 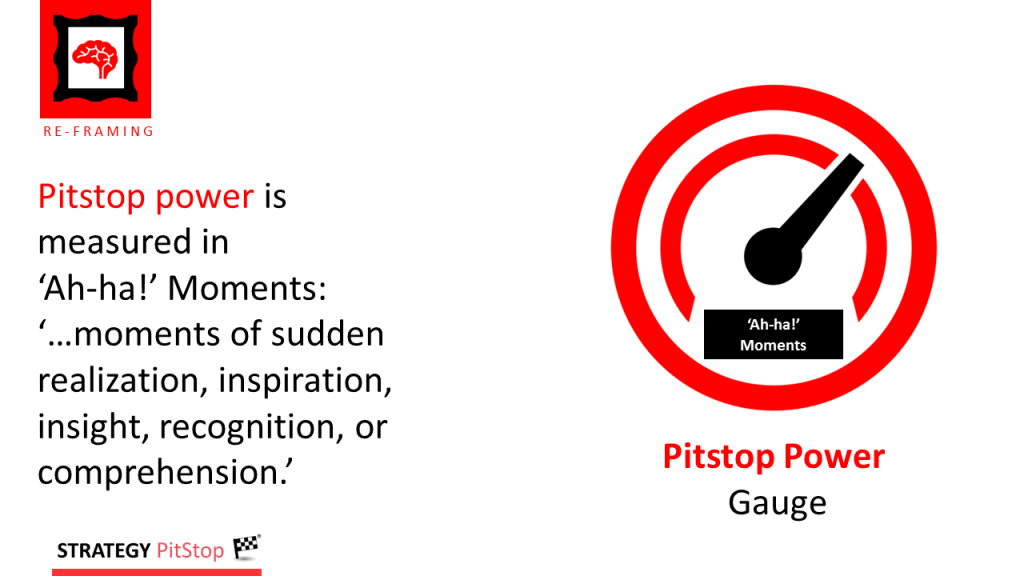 With these ‘Ah-ha!’ moments people gain a new understanding of all the various factors that are shaping the results being achieved and most importantly where the potential for future performance lies.  They see problems with greater clarity and new (perhaps challenging) insights. 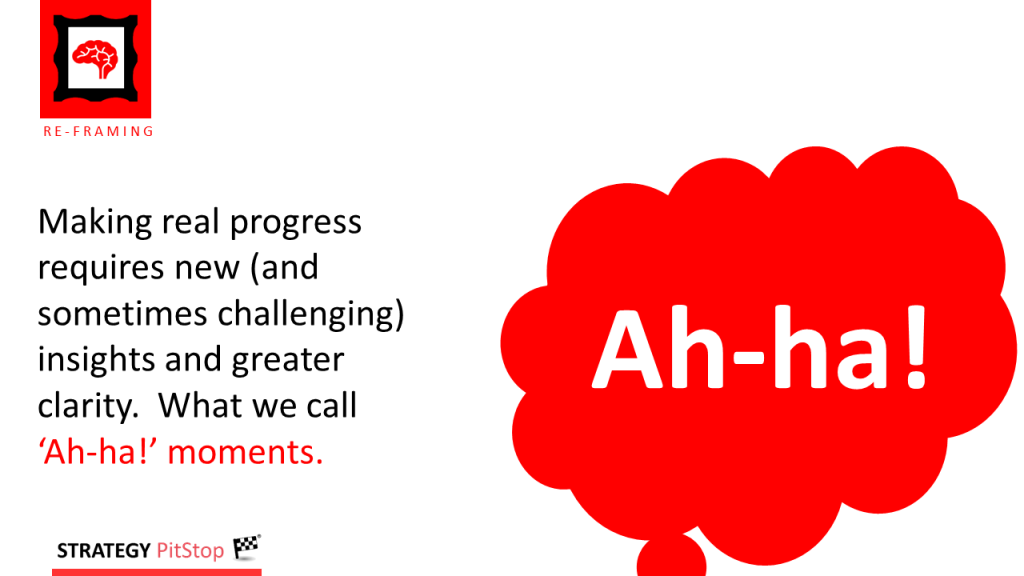 In these moments people gain new insights and realizations – they see connections, causes and solutions that they were previously unaware off.  When it happens new ideas start flowing, creative solutions to old problems emerge and people feel empowered in the process.

90% plus of people who participate in a workshop will experience an ‘Ah-ha!’ moment.  The great thing is that it requires no special effort on their part. 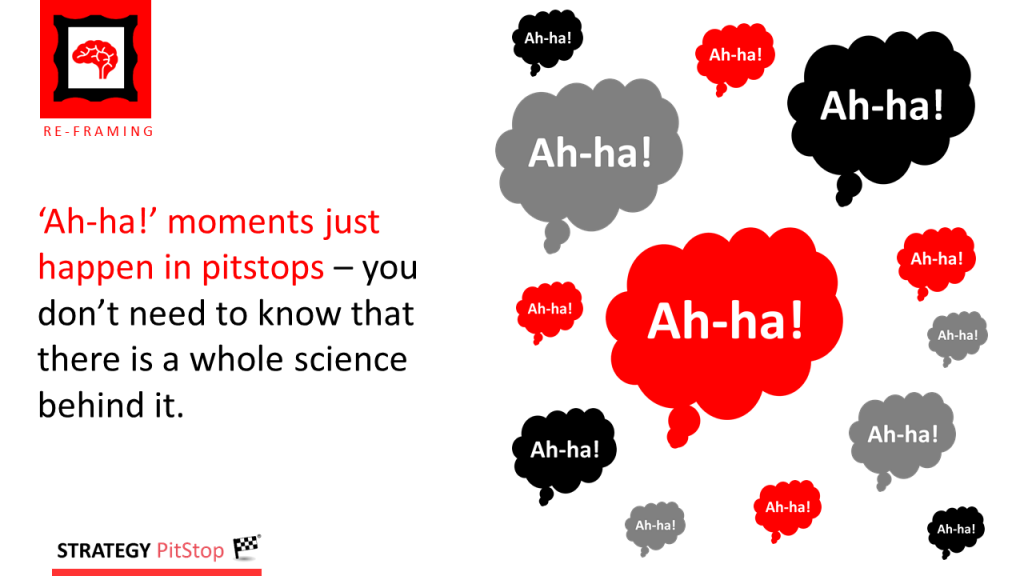 People don’t need to know that Reframing is designed into the PitStop process or the mechanism by which it is achieved.   But if you would like to understand a little more then we would like to introduce you to the process called cognitive re-framing. 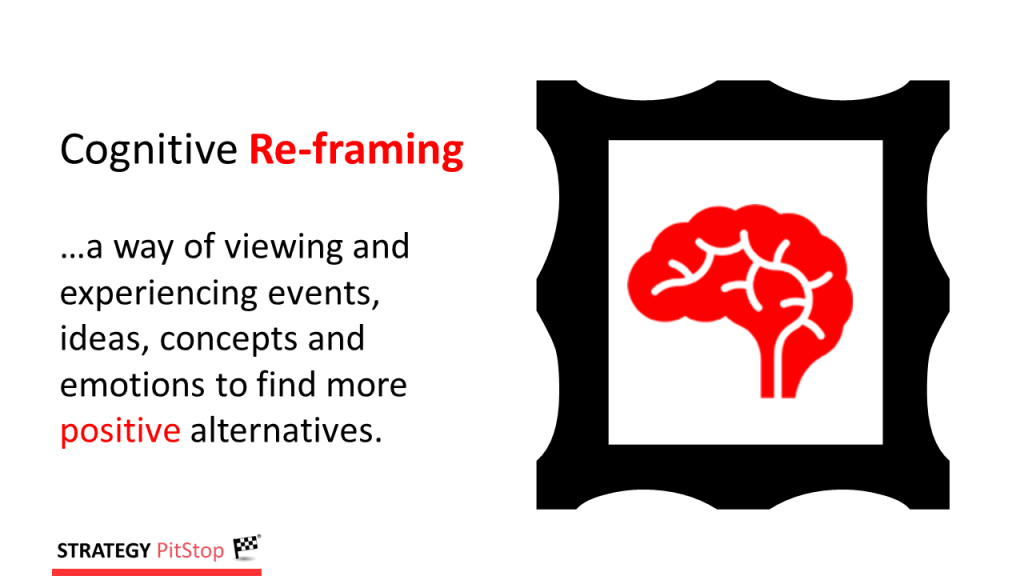 Re-framing is the means by which the PitStop process changes the very way managers and their teams look at the growth challenge they face.   This is what results in those powerful ‘Ah-ha!’ moments.

More technically re-framing means ‘to change the conceptual and/or emotional setting or viewpoint from which a situation is experienced and to place it in another frame which fits the ‘facts’ equally well or even better, and thereby changing its entire meaning’ (Watzlawick, Weakland and Fisch) .

Why reframe the issue of business performance? Well, because many of the limits to growth and performance are to be found in the way we think and talk about the subject. 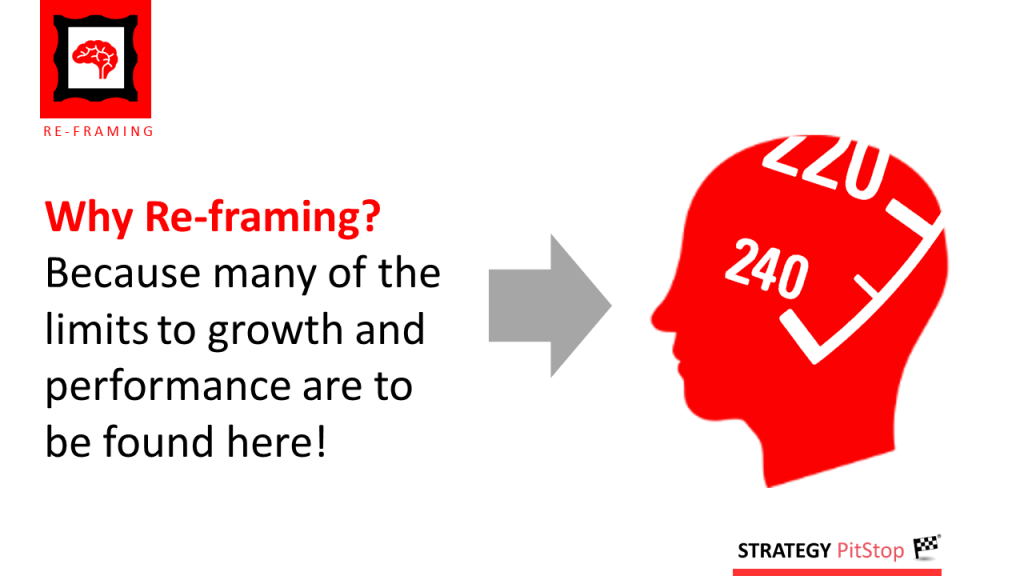 There is a psychological dimension to fast growth and  high performance within teams and old ways of thinking can represent an interference that limits potential.  In other words the attitudes, beliefs, expectations and behaviors of managers and their teams are powerful determinants of the rate of growth.

Seeing the issues of business growth and performance differently is key to making real progress – to breaking from the past, exploring new avenues and exploiting new potential.   Until you change how people see or think about something, then very little else will change.

However if you can change how people see things then you can affect change on the most fundamental level.  Therein lies the power of the Pit-Stop process.  As Proust said; ‘‘The real voyage of discovery consists not in seeking new landscapes, but in having new eyes’. 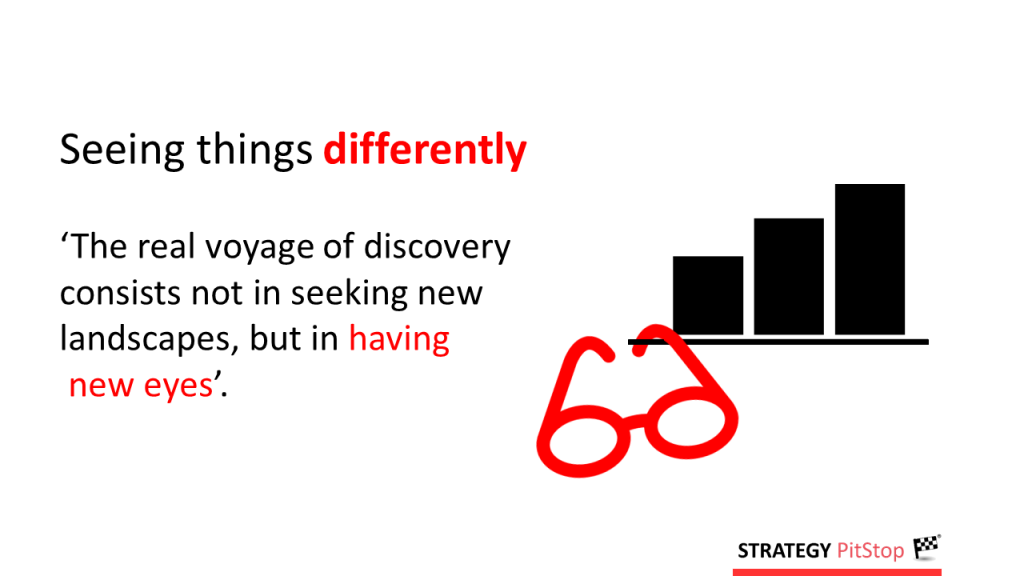 Innovation has to be at the core of business growth, but keeping pace with change can be a problem.  We can too easily get stuck in our thinking.   We approach problems in the same old ways – with the same standard agendas, planning processes, or strategy away days.   But, to paraphrase Einstein ‘today’s business performance problems won’t be solved by the same thinking that created them’. 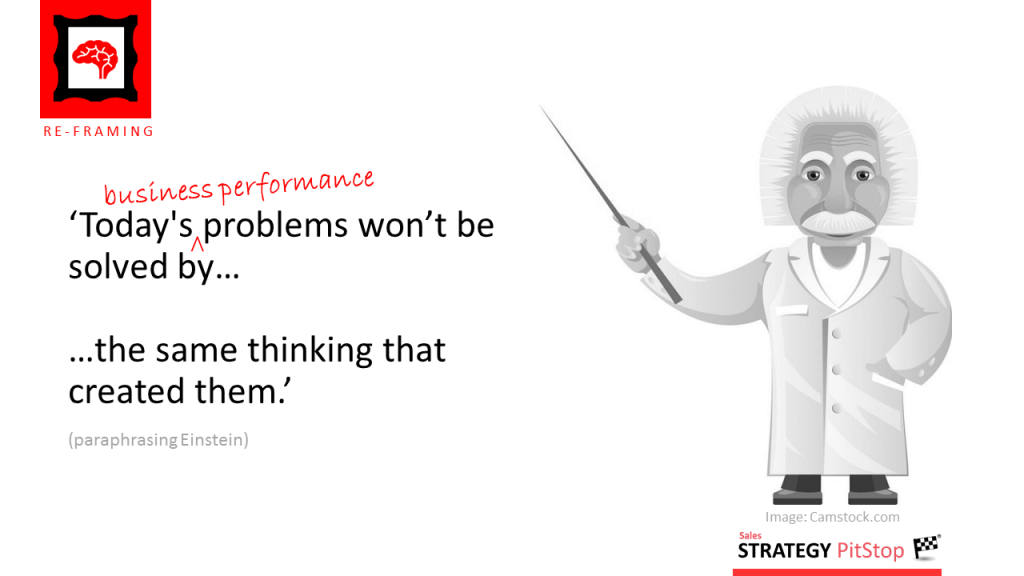 The Strategy PitStop applies new thinking to old problems.  The re-framing gets managers to ‘think outside the box’ in terms of accelerating business and team performance.  It also makes the subject more interesting, more visual and more memorable. 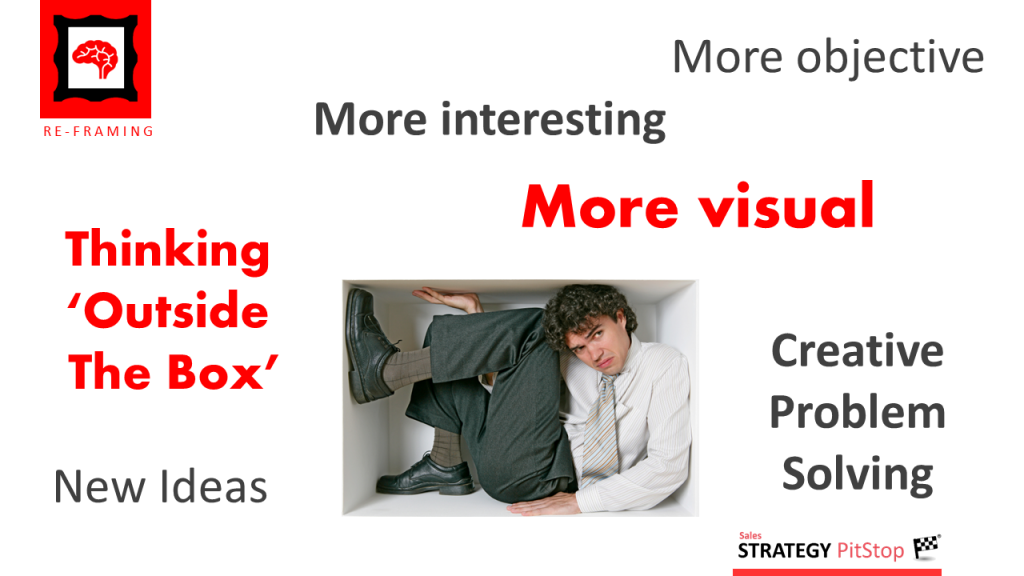 The approach to re-framing enables breaking free of old patterns of thinking and in particular of some negative attitudes and behaviors often associated with the issues of strategy and performance.  To do this the process has to remove any interference in the form of politics and personalities. 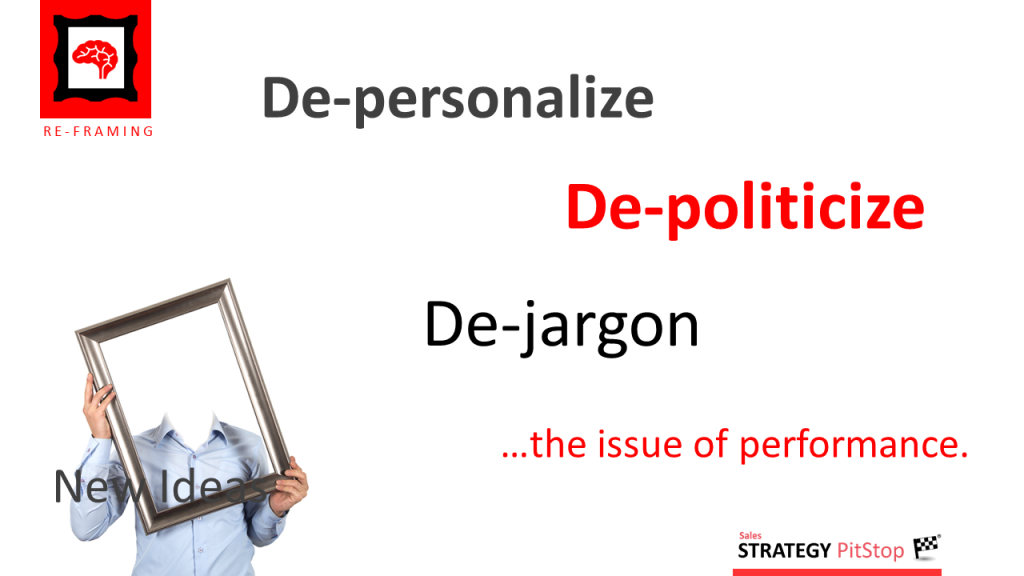 The PitStop re-frames the issue of business performance in order to de-personalize, de-politicize and to de-jargon it.  That facilitates a debate that is more open, imaginative and challenging.

The Strategy Pit-Stop™ use the imagery and the language of high speed racing to help teams accelerate performance and potential. Your business and its strategy are the race car and your team is the pit crew.  The focus is: ‘How to make the car go faster?’ 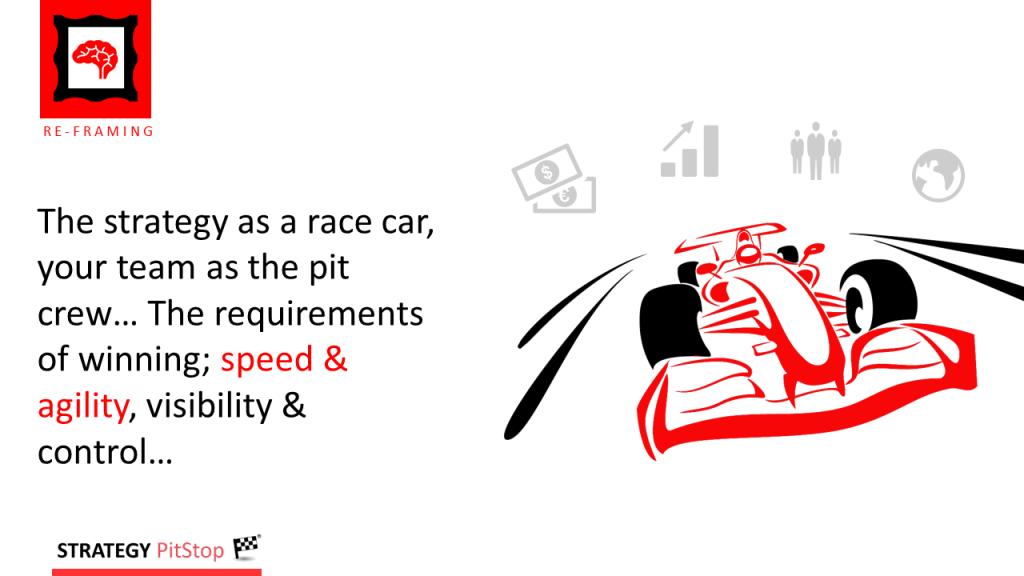 When it comes to Formula One you could not find anything that is more closely associated with ‘winning’, ‘skill’, ‘speed’ and those other factors vital to fast growth.

But the Formula one race car is more than a powerful metaphor.  It is the visual framework for a scientific model, or formula for accelerating growth.  One that is based on extensive global research and the publication of several books. 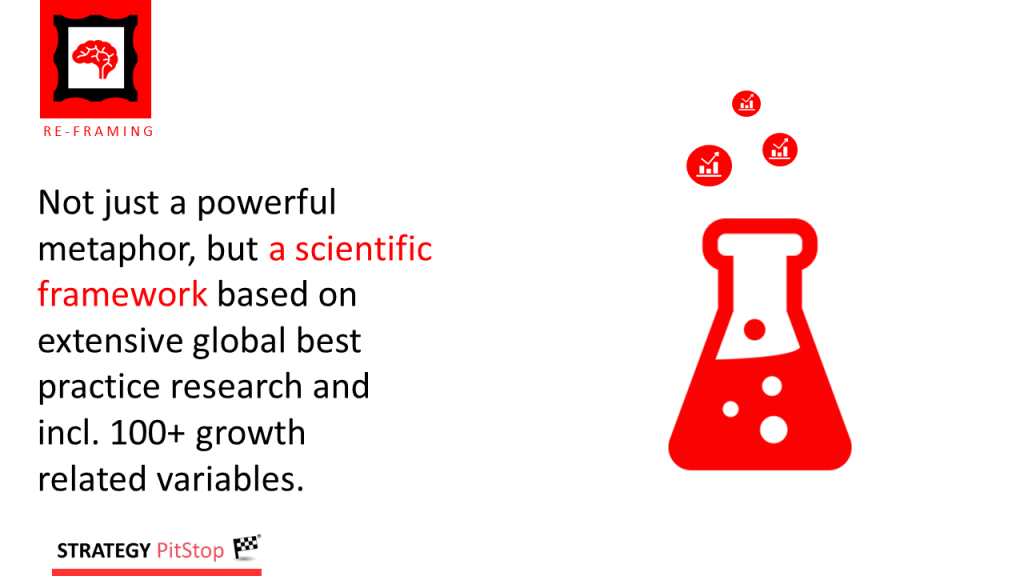 Encompassing more than 107 factors that have been scientifically linked to accelerating and marketing – this formula is at the cutting edge in terms of  the application of systems thinking (or systems dynamics) to accelerating business growth. 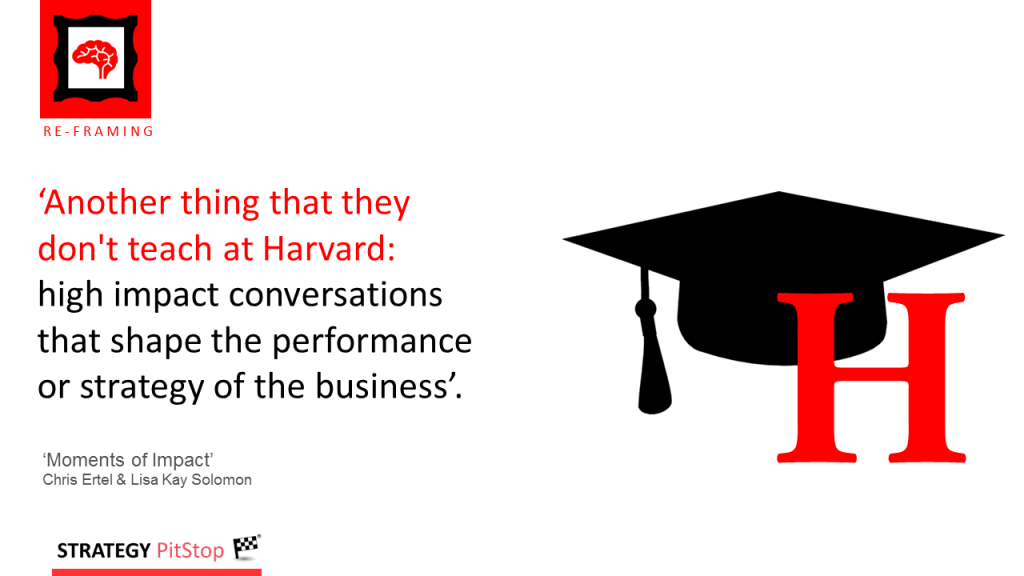 These conversations don’t happen often enough and when they do typically fall short of the type of discussion that is required.  They often end up de-motivating rather rather than inspiring all of those involved’ (‘Moments of Impact’  Chris Ertel & Lisa Kay Solomon (2014)) .  The PitStop models a new mode of conversation and teamwork – one that results in new engagement, creativity and ownership. 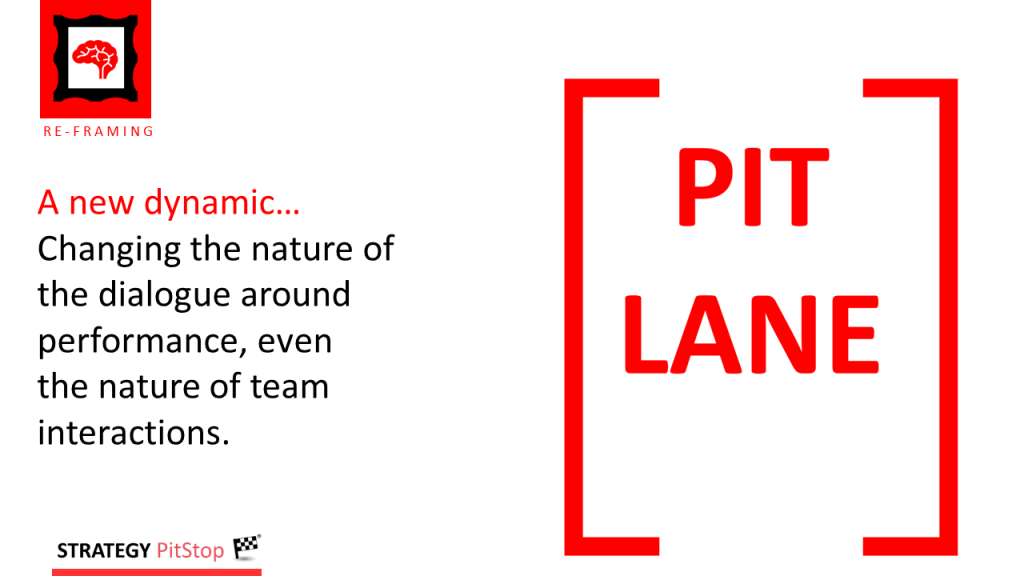 In the pit lane there is a new dialogue, new focus and renewed energy.  The process reveals to all involved the means of working more effectively as a team to acclerate growth potential. 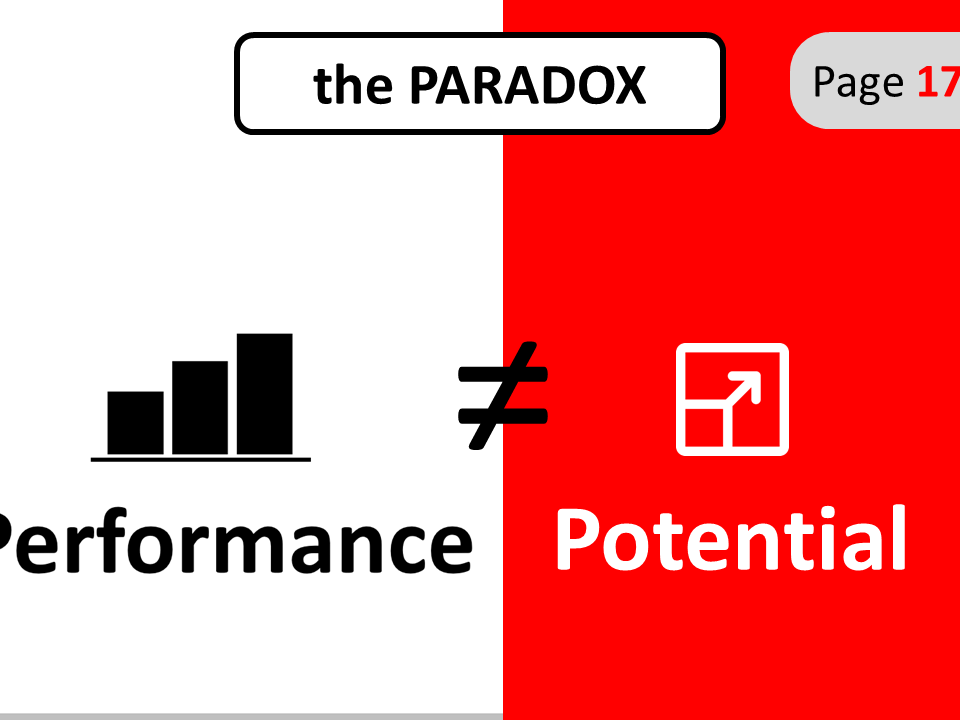 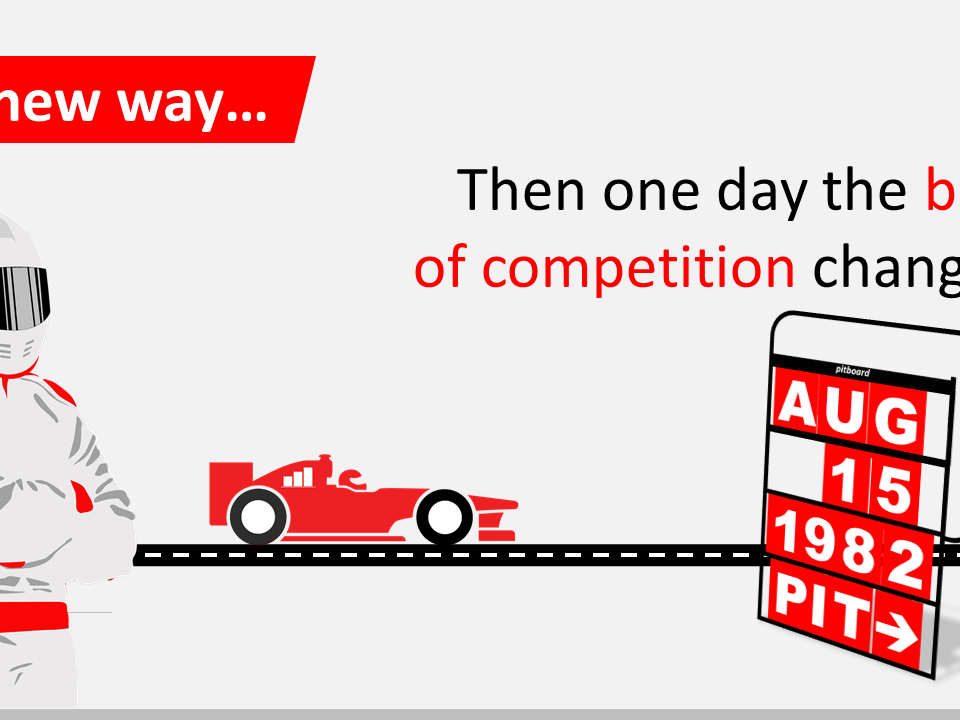